Viva Blackpool is the culmination of years of hard work, dreams and friendship – and this is only the start of the journey. To see where we plan to go, it’s important to look at where we’ve come from. 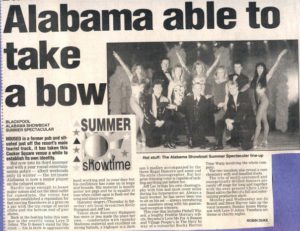 Way back in 1994, Leye D Johns was invited over from a residency he held in Tenerife to open up a brand new showbar in Blackpool called ‘The Alabama Showboat’.

The venue was a first of its kind – with a 12 bedroom hotel above called ‘Libertys’ offering an American style ‘Room Only’ with Breakfast and Dinner an optional extra, the Alabama Showboat was unique in that it offered full production Vegas style floorshows hosted by an outrageous host & compere…  Leye D Johns.

Whilst only a 180 capacity venue, The Alabama Showboat was THE place to be seen on a Saturday night – with stars from the shows on the Piers and venues across the town flocking to the venue to catch the end of the floorshow at the Alabama after theirs had finished.

From years under private ownership by the Robinson Family (Jean, Norman and their son Michael), the hotel grew from 12 rooms to over 70 rooms, and a whole complex including a Gym and Spa (Elite) and a private members club (Faces). In 2003 the hotel complex was sold to Shearings Holidays.

Under the Shearings brand, and manager John McGhee – the showbar evolved into a part of the holiday offering as part of a packaged coach touring hotel. And the entertainment team, including Leye and Martin were invited to national company conferences as the showcase venue under the Shearings Hotel brand.

In 2010, Shearings sadly decided that the entertainment offering was not part of their future plans for Libertys on the Square under their new ‘Bay Hotel’ branding – and in doing so, Leye and Martin were released from their contracts and free to pursue their own projects after 16 years dedicated to the brand.

The Search For A New Venue…

In the time between leaving The Alabama Showboat and opening Viva Blackpool, Leye and Martin focussed on maintaining the entertainment brand that Leye was famous for, and in 2010 a show was created at the famous Layton Institute for Christmas before a following Summer Season in 2011 – as well as a season at the ‘Green Parrot’ in Blackpool (which was owned by ‘Betty Legs Diamond’ of Funny Girls fame).

All the while, whilst producing and directing shows the search was on for a new venue to open. In 2011, whilst passing through Blackpool Town Centre – Martin noticed the ‘For Let’ sign above a former Mecca Bingo premises. Some 11 months later a lease was finally agreed, and a new premises licence granted and in June 2012 work started on converting the 33,000 sq ft premises into an entertainment venue.

The work was entirely funded from the founder shareholders pockets – with saving, redundancy pay and even the sale of Martin’s car funding the project to its initial opening. Friends and family assisted with refurbishing the venue along with local tradespeople – in order to get the venue open within just 4 weeks of getting the keys.

On the 10th August 2012, Viva Blackpool opened up with a VIP evening, and a huge public opening on the 11th August.

The ‘Rise’ of the Viva Brand…

From the year we opened, Viva has attracted the attention of many supporters and fans.

In 2013, we were privileged to be asked by Ant and Dec to feature as a live insert into their ‘Saturday Night Takeaway’ show – where our show was interrupted live on TV and one of our showgirls chosen to play for a holiday to Vegas in a gameshow setup opposite on the Comedy Carpet.

Also in 2013, friends of Viva came to play residences at the venue – including the one and only Joe Longthorne, Cannon and Ball, Brian Conley, Joe Pasquale – and since our friends elevated our venue name we have hosted stars such as Rebecca Ferguson, Melanie C (Spice Girls), evenings with Paul Gascoigne, Peter Andre, Frank Bruno, Robbie Fowler and Gareth Gates.

take the tour below